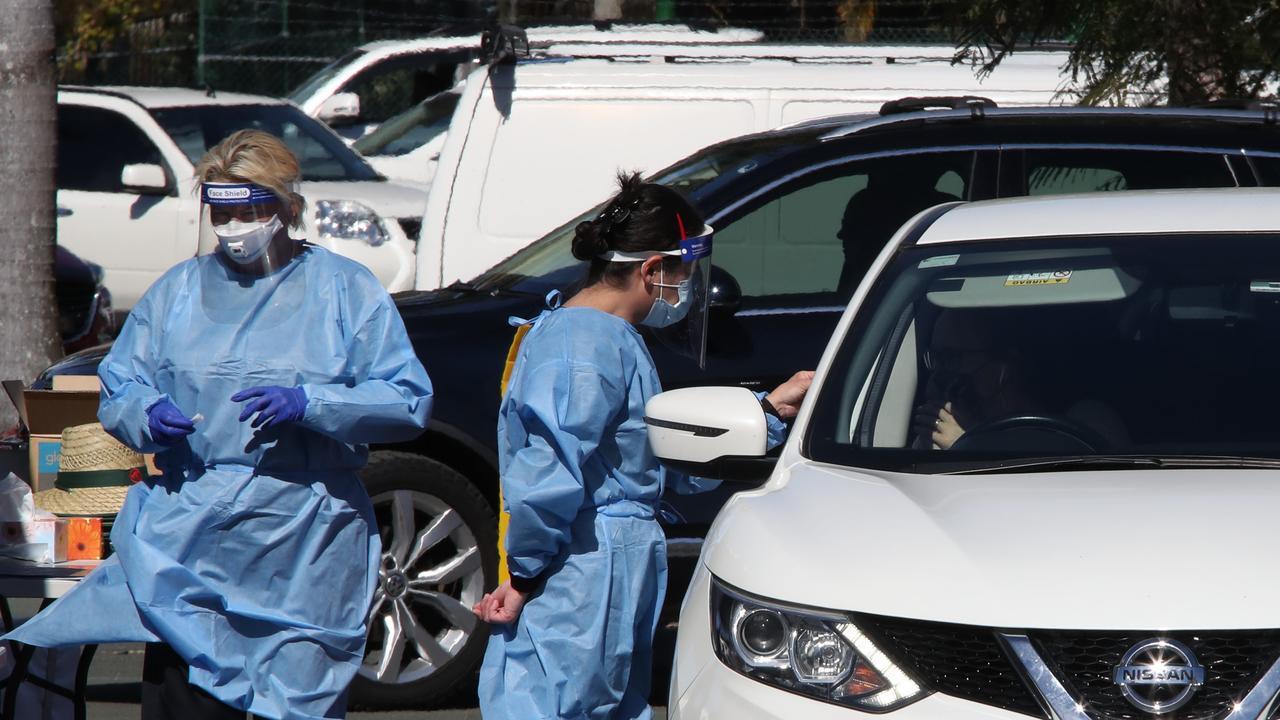 The health district overseeing the Tweed has responded to allegations that an unvaccinated traveler was placed in an induced coma at Tweed hospital after contracting the coronavirus.

A Covid-POSITIVE traveler has been admitted to an intensive care unit at a hospital near the southern Gold Coast border, with a medical staff member who came into contact needing to self-isolate.

It came after a source claimed an unvaccinated traveler was placed in an induced coma at Tweed Hospital after contracting Covid-19.

The immunization status of the intensive care patient was not clear.

The source expressed concern over the affair in the local government area bordering Queensland.

He claimed the man who had traveled north from Sydney or Newcastle had a coughing fit as he sought help in the hospital emergency department, forcing an unknown number of workers to leave. isolate.

He said the man – who was admitted to Tweed hospital on Saturday morning and placed in the intensive care unit (ICU) – “rushed out the front door and collapsed” .

“He coughed on the nursing staff who rushed to his aid and they have all had to isolate themselves for 14 days now,” he said.

The health department has been approached for comment, with all available details being passed on to a spokesperson.

In a response, the health service said: “There are currently two Covid positive patients who are being treated at the North New South Wales hospital, including one in intensive care.”

“A staff member at Tweed Hospital is in isolation after recently coming into contact with a Covid-positive patient in the emergency department. This staff member is fully immunized.

The health service urged anyone who is feeling unwell and showing symptoms of Covid-19 to get tested as soon as possible.

“If you are showing up to an emergency department rather than a dedicated Covid-19 testing clinic, we encourage people to call ahead if possible to alert the facility of their arrival,” the statement said.

It comes as Queensland draws closer to easing its border blockade with NSW in mid-December.

Earlier: Queensland has recorded no new locally acquired Covid-19 cases and one overseas case as the state’s vaccination rate continues to rise.

Prime Minister Annastacia Palaszczuk announced the only new case detected in quarantine at the hotel during a speech to the state parliament on Wednesday morning.

It has also been revealed that sports stars including the Gold Coast Titans and Brisbane Broncos will be on board to support the Queensland Government’s Super Schools vaccination blitz, which will see schools turn into jab centers again. this week-end.

She said 82.75% of eligible Queensland residents had received their first coronavirus vaccine and 71.07% had received a double dose.

Queensland Health has carried out 14,432 vaccinations in the past 24 hours, with most of the injections taking place in Townsville.

Ms Palaszczuk was delighted that 10,871 tests had been performed by Queensland Health in the previous 24 hours.

She said it was “great” that “people still come out and get tested, despite the low number of cases of the virus in Queensland.

“The Covid pandemic is the greatest peacetime challenge this country has ever faced,” Ms. Palaszczuk said.

“It’s not about whether more cases will happen in Queensland, but when.

“Unlike the southern states, we have the ability to protect ourselves before an epidemic strikes.”

The government urged residents of the coast to get vaccinated as soon as possible, before border restrictions eased further on December 17.

November 16: Queensland has recorded no new cases of Covid-19 as Prime Minister Annastacia Palaszczuk continues to urge residents of the Gold Coast to help increase the city’s overdue vaccination rate.

Speaking to the Queensland Parliament on Tuesday morning, Ms Palaszczuk announced a ‘double donut day’ without a new case of coronavirus acquired locally or abroad.

At least one hub will take shape in Southport, but Ms Palaszczuk said more information would be released on participating schools.

She urged anyone hesitant to get the jab to “speak to their trusted local family doctor”.

“They are there to listen to you and to reassure you,” she said.

Ms Palaszczuk said 14,112 vaccinations and 7,999 tests had been performed by Queensland Health in the past 24 hours.

She spoke of a “leading result” in the handling of the virus in Queensland and said the state was “getting stronger and stronger”.

“Our children are in school, their parents are at work and our condition is safe,” she said.

“This government has launched a vaccination campaign and the results speak for themselves. “

Ms Palaszczuk’s firm stance on border restrictions and other preventive measures has been criticized by some, especially residents facing the border blockade.

She said there had been a dramatic increase in vaccination rates in parts of regional Queensland, but that had not happened on the coast.

Border restrictions are expected to ease further on December 17, but Palaszczuk said on Monday that “our December date was getting a bit ahead” due to high vaccination rates across the state.

There were 15 active Covid cases in Queensland.

“On track”: border rules could ease sooner than expected

It comes as the state has recorded no new cases of locally acquired coronavirus and two new overseas cases detected in hotel quarantine.

Speaking in Burleigh Heads on the Gold Coast on Monday morning, Ms Palaszczuk said the state would welcome Queenslanders and interstate residents arriving from hot spots by plane to self-quarantine for 14 days from 5 p.m., if they had tested negative.

Travelers can fly to regional airports as well as Brisbane Airport.

“Now we will be welcoming people from hot spots who are fully vaccinated to enter Queensland and self-isolate at home with a negative test,” Ms Palaszczuk said.

It came after the state hit its 70% double vaccination target.

The newly updated border passes will be available online from 5 p.m. on Monday.

Ms Palaszczuk said a further easing of border restrictions slated for December 17 could come sooner if eligible Queensland residents continued to come forward in numbers for the jab.

“It’s (the 70 percent target) is coming sooner than we expected… we might even see our December date come a bit ahead as well,” she said.

She said the state was “on the right track” but she “did not want to give me hope.”

Meanwhile, Ms Palaszczuk said the coast lags behind the state’s average vaccination rate and urged residents to get bitten as soon as possible.

“The last thing I want to see is a big Delta outbreak before Christmas when our immunization levels aren’t as high as NSW and Victoria,” she said.

“If we get more people vaccinated, that puts us, I believe, in a world class position. “

Two new cases of coronavirus were detected on the coast last week, but no new cases have been revealed in the city since then.

Acting Director of Health Dr Peter Aitken said: “We are still monitoring the Gold Coast and we encourage everyone, if you have any symptoms on the Gold Coast please come in and get tested.

Queensland Health had performed 16,985 vaccinations in the previous 24 hours.

Health Minister Yvette D’Ath said on Sunday Queensland had not registered any new cases of Covid-19.